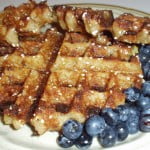 While the results will be slightly different, you can substitute 3/4 cup to 1 cup of demerara or turbinado sugar. You can use your oven to create a warm spot for the flour mixture to rise. Make sure the oven rack is low enough for the bowl to fit in the oven. Turn the oven on for 1 to 2 minutes at 200 degrees F. (It shouldn’t actually reach 200 degrees, but just warm up slightly.) Turn off the oven, place the covered bowl on the rack, and close the oven door to keep in the warmth. If you wish to let the batter stand overnight, strengthening the yeast flavor, covering the bowl and leaving it at room temperature will work fine.