This information pertains to several vegan Liege waffle recipes on this site.

Compared to the traditional Belgian waffles familiar to most of us, Liege waffles (named after a Belgian town) are denser, sweeter, and almost cookie-like. These yeast-raised treats incorporate pearled sugar, formed into tiny spheres and larger than granulated sugar. Upon baking, the sugar forms small caramelized chunks throughout the waffle. Lieges also utilize more animal-derived dairy and eggs than a standard waffle, making them especially great to veganize.

I first had a Liege waffle in Belgium in 2005, shortly before we cut out eggs and dairy. Street vendors seemed to be selling them everywhere, with a range of toppings. They were highly addictive, and I gulped down three of them in one afternoon. I believe I then went into a sugar coma–hard to recall.

I later created several vegan Liege waffle flavor variations that quickly disappeared at non-vegan friends’ parties. However, I left Lieges out of the cookbook for a few reasons. First, they are somewhat unpredictable and gunk up the waffle iron (more on this under “Very Important Tips” below). Secondly, some initial Liege tests worked better with egg replacer than flaxseed, and for several reasons it made sense for the cookbook recipes to be free of egg replacer. Thirdly, even though they eliminate cholesterol, they are so sugar- and oil-laden that I felt uncomfortable promoting them as more than an occasional treat.

I was very excited when Global Vegan Waffle Party host (Christine “Peanut” Vardaros, also a vegan pro cyclist), made vegan Liege waffles at her party in Belgium; she has a great recipe for basic vegan Liege waffles. Because her recipe seems pretty true to most forms of the non-vegan “original” I’ve seen, I don’t attempt to repeat the basic Liege here.

The vegan Liege waffle recipes sat dormant until I learned that at least one local vendor would soon be serving the egg- and butter-laden Liege, and a bit of research suggested they were also catching on elsewhere beyond their homeland. I decided it was time to help spread the word that even Liege waffles can be veganized. Regardless of their ethical stance, restaurants and street vendors can enjoy logistical and economic benefits through using vegan waffle recipes, by reducing or eliminating their need to stock highly perishable eggs, butter, and milk.

If you don’t mind the extra work involved with cleaning your waffle maker, I also encourage you to experiment a bit with these recipes, if they’re not just right for you. Comments, including modifications that worked for you, are very welcome. We want these recipes to be as good as possible, so that we have some stellar vegan options in this area.

Prior to your first vegan Liege cooking adventure, there are several things to be aware of. These waffles are amazing, but they do require above-average preparation and cleanup efforts. Thus, I don’t recommend them to the casual beginner looking for a quick and easy waffle.

If you’re looking for something a little quicker and easier, consider starting with some of the other delicious yeasted vegan waffles, such as the Sweet Yeast-Raised Vegan Waffles. But if you’re a fellow hardcore waffler, read on.

Vegan Lieges are for true vegan waffle aficionados, those who really like to get down, dirty, and crazy in the kitchen. Also, I don’t recommend them if you have only one really nice waffle maker and are trying to keep it in top condition. I actually have a separate waffle maker that I use just for occasional Liege baking.

Due to the very high sugar and margarine content, these waffles will cause a gooey residue to accumulate on your waffle iron. If not cleaned after each batch of waffles, major sticking will develop, and the coating may become difficult to remove. After your waffle iron has been unplugged for at least 5 minutes, but before it’s cool, clean the inside using pieces of crumbled-up paper towel on the end of a chopstick. To avoid any risk of fire, dip the paper towels in water before discarding.

My experience has been that the grids don’t need to be cleaned perfectly after each batch, at least not if the iron isn’t sitting for several weeks at a time between batches, because some of the oil and sugar residue will re-melt the next time the iron is heated. However, you do need to get out at least some of the residue. Every few batches, you may need to resort to some type of non-toxic soap and water solution, being very careful not to get water inside the iron.

Although Liege waffles contain a great deal of margarine, you still need to spray the iron grids with oil prior to each waffle. This will help to reduce sticking due to the caramelized sugar.

If possible, open a window while cooking them, and do not cook immediately beneath a smoke detector. The sugar may create a bit of smoke.

Plan to get your hands messy while making these—you’ll have to knead dough and then mix it with your hands after you’ve added ingredients including margarine.

I haven’t yet had a chance to verify this, but someone else who is also familiar with the delicious Liege waffle explained that commercial establishments set their Liege irons at a slightly lower temperature to lessen burning of the sugar. If that’s the case, having an iron with an adjustable temperature could be particularly helpful.

Despite all of the above, I still believe that making an occasional batch of vegan liege waffles is well worth it. I’ve watched piles of these quickly disappear at a few parties, and it’s one of the few types of waffles that you can serve a few hours after making them, even without reheating.

Don’t be discouraged if you don’t bake Liege waffles just right on the first try, as it takes a little practice to avoid overcooking or undercooking. Happy Lieging! 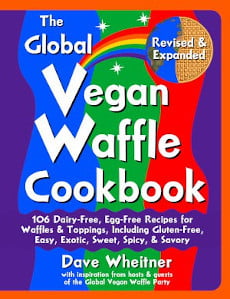