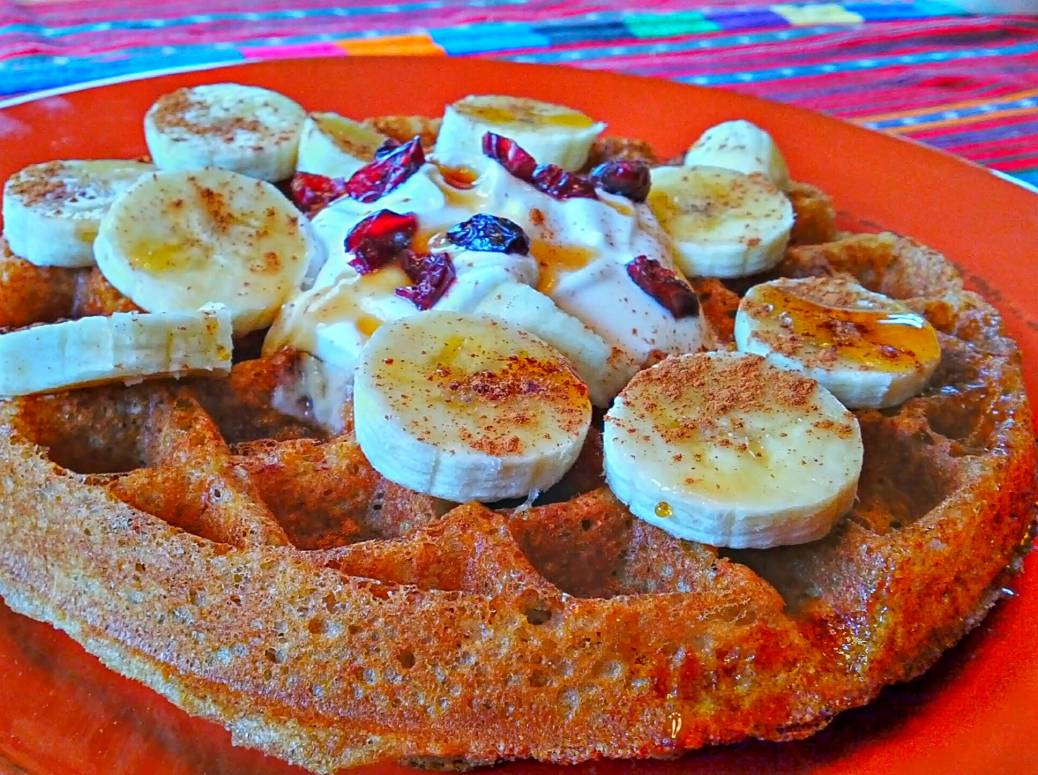 This yeasted Belgian vegan waffle recipe is for true connoisseurs. It might even give the Sweet Yeast-Raised Vegan Waffles a run for their money. These are a special treat for several groovy reasons:

These vegan waffles require a bit of planning, and a blender powerful enough to process wheat berries. I used a Ninja Ultima Blender

, which also does a great job of processing rice into flour. If you substitute a store-bought whole wheat flour, a whole milled flour will likely provide the closest results.

Both fluffy and moist on the inside, and crispy on the outside, they are well worth the wait. Top with coconut cream, banana, maple syrup, a dash of cinnamon, and dried cranberries, as pictured. Or check out some of the delicious vegan waffle topping recipes. Makes 5 to 6 (7-inch) round Belgian vegan waffles.

In the case that your taste buds and stomach aren’t willing to let you wait that long, you can always get the batter going, make another type of yeasted vegan waffle in the meantime, and then enjoy these morsels when they’re ready. A great excuse for a superextrawaffley weekend!

While I used hard red winter wheat berries and loved the results, feel free to experiment with other varieties. Do not substitute artificial maple syrup, as it may not have the acidity needed to react with the baking soda. If you don't have real maple syrup on hand, you can use two tablespoons of molasses alongside two tablespoons of another sweetener. As the batter is relatively thin, you'll have the best results with a waffle iron that flips and is at least 1,000 watts. I've personally had great luck with the 1,200-watt Waring Pro WMK300, but it now appears a bit harder to find. The less-expensive 1,350-watt Presto 03510 Flipside Belgian Waffle Maker has also received many great reviews. I don't have any experience with waffle irons that make two waffles at a time, as spreading the wattage across a larger grid area may reduce the temperature. You can use your oven to create a warm spot for the flour mixture to rise. Make sure the oven rack is low enough for the bowl to fit in the oven. Turn the oven on for 1 to 2 minutes at 200 degrees F. (It shouldn’t actually reach 200 degrees, but just warm up slightly.) Turn off the oven, place the covered bowl on the rack, and close the oven door to keep in the warmth.
Keyword vegan waffles, yeast-raised waffles