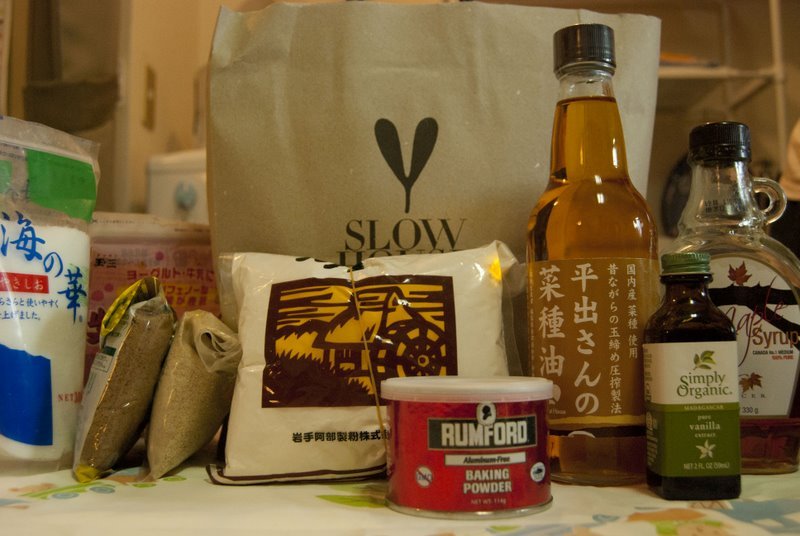 The May-June 2011 Global Vegan Waffle Party Season has already included celebrations in more than 20 cities worldwide. Wafflers gathered (or soon will gather) in Australia, Belgium, Canada, Japan, New Zealand, the UK, and the US. I very much enjoyed getting updates and/or photos from several hosts, including Andrea in Boston, MA, Dallas in Minneapolis, MN, Earl in Tokyo, Japan, Ida in New York City, and Carrie in Santa Barbara, CA. (More descriptions and links to external photo albums below.)

The Boston waffle party features some of the best photos of companion animals having a great time. Andrea in Boston reports: “We had three kinds of waffles, tons of fruit, tempeh bacon, smoothies, pan fried potatoes and a couple of toppings. [One photo] is my friends visiting from Austria; hopefully the WP will be really global in the future…After the party, we took our friends for a walk on the beach with the dogs who burned off some waffle calories.”

The Tokyo Vegan Meetup Group decided to connect with one another and have a bit of fun, despite the harsh difficulties experienced in Japan this year. Earl shared this:
“Our waffle party went well this year. Not too big, just 12 of us, but everyone showed up and we had a nice time. We tried a few different recipes this year. Banana-oatmeal-raisin, Carob, some plain, and Matcha waffles. Matcha is a kind of traditional Japanese tea. We made a mix of the naked waffles and then just added some Matcha powder to it. Tasted great and made for an interesting color (see the photos). The best topping this year was a cashew nut cream. We also used another kind of machine that makes bite sized shapes.”

Tokyo’s photos are the first to include a keytar (it brought back old teenage memories of trying to create my own keytar with a belt and duct tape), and their waffle maker is even more creative than the fish-shaped waffle maker they used last year.

I’m a bit envious of the Go Vegan Santa Barbara Meetup’s party because they even had a pool to enjoy alongside all the amazing food. Their photo collection gets the award for the brightest costume ever worn to a vegan waffle party.

The Minneapolis Animal Rights Coalition’s Wafflepalooza Twoza, which gets this year’s award for most musical-sounding event name, attracted a broad range of ages. Some pictures show individuals enjoying waffles, while others appear to show individuals with an intense craving for them. Once again, some very cute kid ‘n’ waffle pics! An impressive assortment of toppings and some colorful plates as well.

Ida in New York City reported that their gathering this year was a low-key event with a few friends. No photos, but it would have been hard to top the delicious vegan waffle photo she posted from last year’s party.

The Brisbane Vegan Meetup’s waffle party, organized by Grover himself, included chocolate waffles and a range of toppings. There was even a dietitian present to answer questions about vegan nutrition–what a great resource.

Thanks again to those who have shared some great highlights! They’ve been a pleasure to see and read about. Highlights from the Tulsa, OK, Albany, NY, and Pittsburgh, PA parties appear in earlier posts.