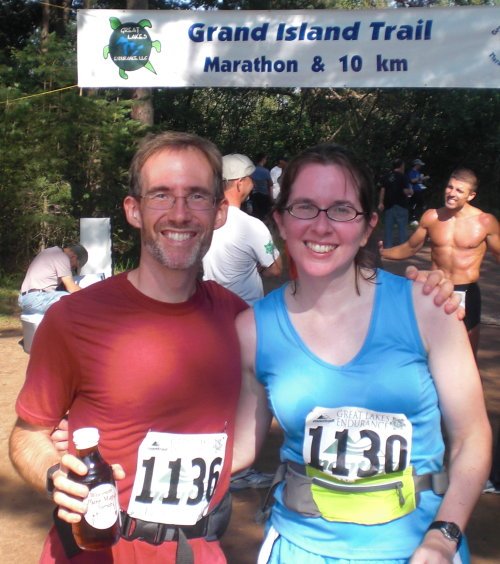 Sometimes you just know that you were meant to have something. That happened to me recently when we ran a wilderness 10K on the trails of Grand Island, just off Michigan’s beautiful Upper Peninsula.

That guy behind us in the photo, by the way, looks like he keeps himself pumped up with a healthy regimen of vegan waffles.

Due to its location and efforts to minimize ecological impact, the event didn’t have a huge number of runners. Nonetheless, I was still excited to win the award given to the first finisher in each age class: a bottle of real maple syrup from neighboring Wisconsin. A prize just doesn’t get any more fitting than that!

We’ve already gone through about a third of the bottle, which I agreed to share with Jen because she completed her first 10K that day.  Also a huge win worth celebrating! All right, I may have shared it with her even if she hadn’t run…

While I most regularly use the darker grade B syrup from our Co-op, I have to say that this stuff (from Maas Sugarbush, which appears to have no information on the web) is also pretty darn tootin’ good. I’m not sure of the grade, but it’s a bit darker than some of the grade A amber syrups we’ve had, with nearly the same thickness as the grade B we normally use. It has plenty of maple flavor alongside the sweetness.

On a hot day, it’s also great to mix a bit of maple syrup with some chilled hazelnut milk and a few ice cubes. If you’re ever in that region of the world, it’s worth taking home a bottle for your vegan waffles or pancakes, even if you don’t feel like running around on an island.