…And perhaps for a vegan waffle party in particular. Thanks to you, The Global Vegan Waffle Party is positioned to make even greater social impact as we enter our fourth season. While it’s still largely underground, several trends may support it in gaining mainstream influence. Since 2008, we’ve observed substantial increases in the following:

In other words, global, vegan, waffles, and parties, in various combinations, are all getting hotter. A few specific examples:

A few vegan waffle party guests and hosts have asked whether we’ve considered catalyzing other types of vegan food parties. This might include, for example, a Global Vegan Ice Cream Party, where guests bring a range of toppings for store-bought or homemade ice creams. Because of this, a few months back I sought input on whether you’d like to see one or more additional types of global vegan food parties, and if so, which type(s) you’d be most likely to participate in. But worry not; WaffleParty.com certainly isn’t going anywhere…

Global Vegan Waffle Party season isn’t over yet, and we’re still awaiting some highlights from other parties to post here. However, I didn’t want to waste momentum and interest on a related topic in the meantime.

Several people have asked about expanding the Global Vegan Waffle Party concept to a few other types of vegan food, to raise even more awareness. Thus, we seek your input. 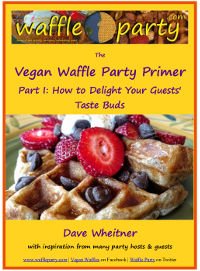